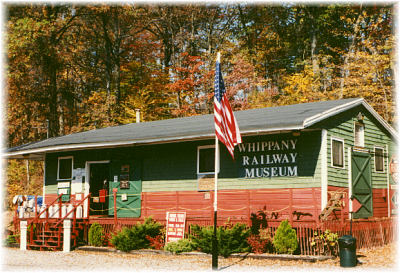 The Whippany Railway Museum has been bringing to life the history of New Jersey’s railroads to the public since 1985. However, the Museum’s age belies its heritage. The Museum is built upon over 30 years of preservation experience. In 1965, Whippany was home to the Morris County Central, a steam tourist railroad.

Several employees and volunteers of the MCC banded together and cofounded the Morris County Central Railroad Museum. This group began displaying a small collection of railroad memorabilia in one half of the Morristown & Erie freight house, which at that time was directly alongside the stone passenger station. In 1967, the excursion railroad funded the movement of the freight house across four tracks to its present site across from the passenger station.

From 1967 to 1973, the freight house and Museum were enjoyed by thousands of visitors who came to ride the excursion trains. However, a change was to take place: the Morris County Central decided to move its tourist operations to Newfoundland, NJ. The small Museum followed suit, and in 1974 was in operation again.
Now known as the Pequannock Valley Transportation Museum, it was based out of a converted railroad refrigerator car.

The economics of the late 1970’s had an adverse effect on the Morris County Central, and it ran its last train at the end of 1980. The Museum stayed on, however, but by the beginning of 1983, PVTM members were actively looking for a new home, preferably in a railroad structure.

The old museum building at Whippany was immediately considered, but its condition was one of extreme deterioration. Badly vandalized and covered with weeds, it was scheduled to be demolished. Undaunted, the members approached the Morristown & Erie Railway and received permission to rebuild the structure.

Much work was undertaken: the building was lifted up off its old foundation and placed on new firm cribbing. The loading platform was rebuilt, and inside and outside walls were refinished. By January of 1984, the last of the PVTM’s property was moved back down to Whippany. At the time, the Museum was reorganized as the Whippany Railway Museum to better reflect its new location. Work continued – painting, setting up the Gift Shop, creating displays – all throughout 1984 and 1985.

Over the years, the Museum site has become a home for several pieces of privately-owned railroad equipment. A variety of passenger cars and cabooses have been brought to Whippany by their owners, where they can restore and display their equipment in a pleasant early 1900’s atmosphere. They can be found on the tracks around the Museum.

Other equipment found outdoors includes several coal loaders and historic Anthracite coal advertising signs, generously donated to the Museum by L. S. Young and Sons of Denville. Anthracite, or “hard” coal, was a commodity that many New Jersey railroads were founded for and relied on for revenue for over half a century.

Trains of the smaller variety are also found at Whippany. The Museum boasts one of the largest O-Gauge model train layouts found in New Jersey. The 30-foot-long Whippanong Valley Railroad is our well-known layout that’s always abuzz with activity. A favorite with children, the layout features many operating accessories that can be interactively controlled. The layout has received much press, including a cover story in O Gauge Railroading magazine’s October 1991 issue.

Interior museum displays highlight a different New Jersey, and specifically Morris County, area railroad each year. Displays show the history of the railroad through representative models, historic photographs, and rare paperwork. The history of New Jersey’s railroads comes alive within the walls of the Museum’s freight house.
Other interior displays highlight a variety of railroad china, tools, and appliances such as bells, whistles and headlights.

A special tribute to another form of transportation closely tied to railroading, the great Ocean Liners, also plays a prominent role in giving the visitor a more complete view of New Jersey’s transportation infrastructure and how railroads fit into it.

Notable exterior landmarks include the quaint Whippany passenger station, built of stone; and the historic water tank from which Morristown & Erie steam locomotives once quenched their thirst. A new roof for the water tank was installed, funded by the Museum, to help preserve the classic structure. Keeping history alive takes much maintenance!

Adding to the railroad ambience of the Museum are a Lackawanna Railroad semaphore, Susquehanna Railroad order board, and several cast iron signs from various railroads. All these pieces were donated to the Museum, restored and set in place by Museum members.

Museum traditions that are popular with many people are the annual Easter Bunny Express, Halloween Express, and Santa Claus Special excursion trains. These trips afford an opportunity for families to experience the thrill and excitement of riding a shortline passenger train, including a classic red wooden caboose, while Santa Claus, the Easter Bunny, or a host of ghoulish characters visit the children. These trips give today’s generation a chance to experience the glory of railroading, something that we cannot afford to lose to the past.

The Museum is located along the right-of-way of the Morristown & Erie Railway, a local freight-hauling railroad. Without the help of the M&E, its dedicated employees and management, the Museum would not be at the point it is today. Special consideration is due to the M&E’s late President Benjamin J. Friedland, without whose invaluable help over nearly 20 years, enabled the Museum to prosper and grow. The Museum is grateful for everyone’s past help, their current support, and we look forward to a bright future together.

Today, the Whippany Railway Museum is firmly committed to its role of preserving the heritage of the railroads in New Jersey and the Morris County region. The Museum has made tremendous progress over the past few years in the acquisition and restoration of new equipment, thanks mainly to the donations and support of our visitors.
The Whippany Railway Museum has shown that it is indeed possible to have a quality operation through much hard work and the tremendous positive support of the public.

We hope to continue in our objective of preserving the history of railroading for generations to come, and we thank you for your continued support of the Museum – without it, we would cease to exist! And enjoy all other museum news update about Whippany Railway Museum news at here.

Copyright © 2021 The Official Web Site of the Whippany Railway Museum